Back squats are unquestionably one of the single most productive exercises that can be performed in the weight room to increase overall strength and power. Together with bench presses and deadlifts, this trio in my opinion are the most effective at gaining overall strength and gaining muscle.

There’s no reason there should be blanket cues that encompass everyone—especially where exercise is concerned. When it comes to squats sure, everyone knows there are basic tips to follow in order to stay safe and prevent injury – keeping a tall spine, proper breathing methods, distributing weight through the entire foot, and tightness through the core and upper back. And they go without saying.

Nevertheless, the exercise still has its critics and myths continue to haunt us. Some of them are as follows:

1. Your knees can never go over your toes when you squat 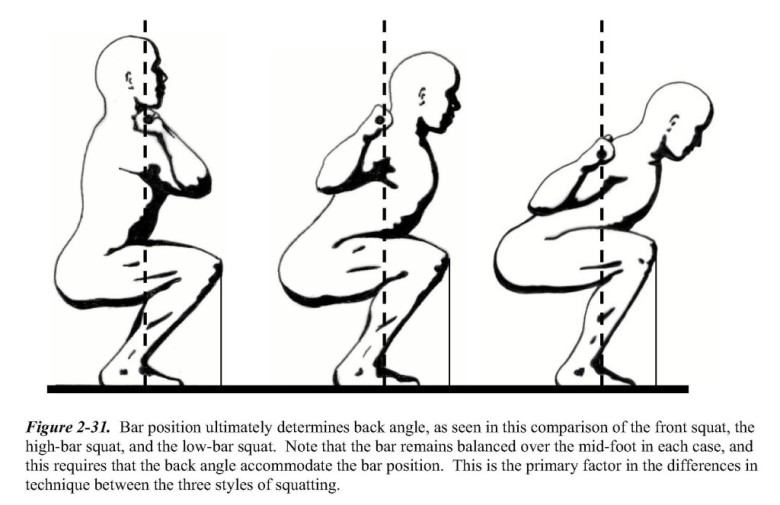 The theory that knees should never go over toes was found in a study that found maintaining a vertical lower leg as much as possible reduced strain on the knee during a squat. However, the study only looked at two dimensional models of the knee joint, so it lacked consideration of forces working from above, at the hip, below, and at the ankle, which all receive considerable force in this position

The reason we are told to ensure our knees don’t go over our toes is actually less about our toes and more about our centre of gravity and muscle recruitment. With the weight shifted back, we get more muscle activation from the glutes and hamstrings, whereas when our weight is shifted forward the focus is more on the quads and anterior chain. So… knees over toes is a myth as the toes simply serve as an arbitrary point and the guideline should really be more to do with how to balance load, but the knees over toes works as a simplified guideline.

2. Deep squats are bad for your knees 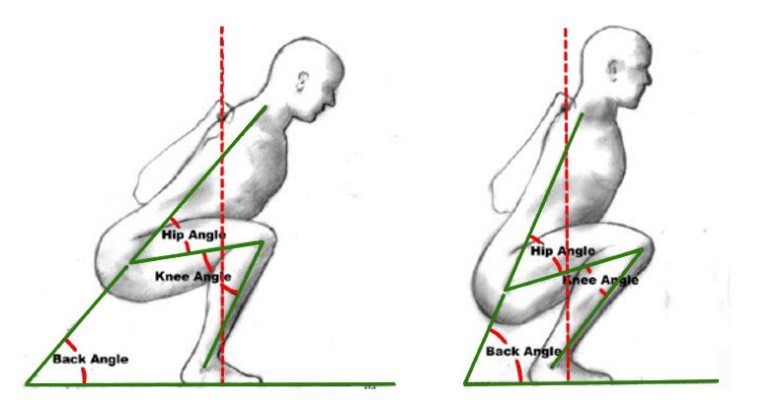 Contrary to popular belief, squatting deep is not bad for the knees – studies have found there is no difference between partial, parallel and deep squats impact on the knee.  Another study by The Journal of Biomechanics found that the deeper the squat, the less pressure is created inside the knee. The journal of strength and conditioning research also completed a study which concluded that parallel squats with heavy weights are less effective at increasing strength than deep squats with a lighter weight.

Obviously, there is not a one-size-fits-all perfect squat, but in most cases, gradual progressive training to the full range of motion of a deep squat will be effective.

Myth. Despite the research supporting squat depth as seen above, failing to squat deep doesn’t mean that the squats don’t count. In fact squatting to parallel is probably the most widely used squat because it is arguably the safest form of squatting and the easiest to perform.

For some people, though it has greater muscle activation, squatting below parallel just isn’t possible, be it due to lack of flexibility, lack of strength or lower back issues.

If the lower back rounds when the athlete performing a full squat breaks parallel, it’s time to stop. Rounding of the back during this phase of the squat places intense pressure on the lower vertebrae of the back. Research has shown that during the deepest phase of the squat, this compression is six times greater than at the top of a squat.

Work on flexibility by performing bodyweight squats and gradually sinking lower until you can break parallel and enter the full squat without compromising your spine. Dynamic warm ups and flexibility work will help to increase your range of motion.

As much as you may enjoy staring at your squirming face as you squat, “head up” is one of the worst commands you can give to a client. The logic behind it was/is that the body goes where the head leads and therefore if you look up, you will be less likely to fail your squat. However, with a heavy load across your shoulders looking up increases the amount of pressure on your neck and could potentially lead to slipping the discs in your neck. Ideally, the aim should be to keep your spine in neutral alignment. For most people you need to keep your eyes forward and tuck the chin slightly.

This myth can be traced to a research that found that squats increased knee laxity, thus increasing the risk of knee injury. The results of the study have never been reproduced, and later research found that populations that performed squats, such as powerlifters and Olympic-style weightlifters, possessed more stable joints that other populations.

6. The Deadlift is a good substitute for squats

The deadlift is a great core exercise that compliments the squat by more aggressively working the trapezius, grip, and hamstrings. The issue with the deadlift is that it doesn’t work the legs through a large range of motion as the squat and as such doesn’t provide complete development of the quads. Performing lower body exercises only through a partial range of motion tightens up the tendons, making athletes more susceptible to injuries, and reduces knee stability. Rather than choosing between squats and deadlifts, include both of these powerful exercises in your program.

The idea is that this training method would work the muscle used in the isolation exercise harder. However, research found that because lighter weights are used in the second exercise, the strength training effect is reduced. The leg extension is fine as an auxiliary exercise, but they should be performed after squats, not before.

8. Your feet should be shoulder width apart

Let’s be realistic here. It may make for a visually appealing setup when you have a semi-wide stance when squatting, but this statement gives no consideration to the lifter’s anatomy. There are big guys out there who have very wide shoulders, so this cue would almost put them in a sumo squat position right off the bat. Not following your body in this regard may lead to clearance issues when the ball and socket joint of the hip are restricted due to your stance.

In fact, one may choose a very close leg stance on a particular day and a very wide stance on another to ensure they hit all their muscle groups or to avoid a monotonous movement.

The worst thing a lifter can do is try to fit a round peg into a square hole. There’s no one-size-fits-all on body types and skeletal structure, so take heed of this important information.